We should be very happy that we no longer live in the USSR, and that a whole generation has now grown up since its collapse. However, those times are still a part of our history, and using its paraphernalia as a tourist attraction draws in many local travellers and especially Western tourists. Now, after 30 years of a free Latvia, these places seem exotic, so here are a few ideas of where to go to travel back in time.

Soviet Tours and Tastes in Daugavpils

"The themed excursion is based on the time when the fortress was host to the Daugavpils Higher School of Military Aircraft Engineering (ДВВАИУ - Даугавпилсское Высшее Военное Авиационное Инженерное училище). On October 4th, 1947, the decision was made to create an aircraft engineering school at the Daugavpils Fortress. The school began operating in 1948, when the first company of soldiers was sent to the fortress—soldiers from the Second World War front. The school was in operation until 1993. While the school was in operation, they built several new buildings (including five blocks of flats for the families of officers), but the fortress itself was also kept and maintained," explains Vitālijs Petkuns, Senior Customer Service Specialist at the Daugavpils Fortress Culture and Information Centre. It is about this era that the guides tell during the excursion. You can book in advance by phone: +37165424043, +37128686331. You can also apply for the tours in person at the information centre, as long as a guide is available at that moment, explains Petkuns.

Furthermore, for those interested in Soviet history, Daugavpils has even more attractions. For example, an interesting place is Bunkurs, a historic gallery installed in the basement of a block of flats, an authentic Soviet-era civil defence bunker which still has its original heavy metal door, explained Lolita Kozlovska, Senior Tourism Expert at the Daugavpils City Municipality Tourism Development and Information Agency.

Meanwhile, some time ago, Ēdnīca Nr. 1, the city's first retro cafe, was opened in Daugavpils. It offers Soviet cuisine and also has a shop which sells interior goods from cafes. The cafe offers a daily set breakfast and set lunch. Their signature dishes are homemade chebureki and homemade Šarlote pie.

Aizkraukle, which was called Stučka in Soviet times, is one of the youngest Latvian towns. Stučka was built in the 1960s as a construction workers' village for those building the Pļaviņas Hydroelectric Power Station. Traditionally, Stučka is associated with typical Soviet-era buildings. That's why it seems like fate that the Aizkraukle History and Art Museum's permanent Soviet exhibition is located here, in the Soviet-built Culture House. This exhibition shows the life of those under Soviet occupation in all its colour: the ideologisation of life, social life, work and leisure, education and culture. Parts of the exhibition are dedicated to the Pļaviņas Hydroelectric Power Station and the history of Aizkraukle (Stučka).

The building contains a large hall for showing Soviet documentaries and art films, as well as cartoons for children.

The exhibition is full of Soviet-era artwork, and from November the central hall will display a large-format social realism painting showing industrial and work scenes, explains Līga Turjanska, an Aizkraukle History and Art Museum specialist.

The central part of the building displays Soviet cars belonging to the Antique Automobile Club of Latvia, while a side room is dedicated to the construction of the Pļāviņas Power Station and the history of Stučka.
There is a separate library—the Red Corner. Here you will find political information and books and magazines published in the Soviet era.

Editions which aren't part of the main collection can be taken away, and likewise all are invited to bring their own additions to the library.

Another hall shows life in the Soviet era—apartment interiors from the 1950s to 1980s: typical furniture, paintings, household objects, dishes, textiles, clothing, and electronics found in every household.

At the end of the year, there will be a new exhibition commemorating the victims of Soviet genocide, as well as a hospital interior, a military area, a children's corner and much more.

Zeltiņi – Lenin Square in the Middle of the Forest

When Latvia was behind the Iron Curtain, our country was filled with many secret USSR military bases which even today contain many secrets. One such military location is the Zeltiņi Missile Base near Alūksne, whose abandoned infrastructure is a magnet for tourists with various intents. The forest still contains the hangars where missiles and launchers were once kept, several base buildings, guard posts, and other unusual elements. You can even play paintball here.

In Soviet times, this base was the location for the 30th Air Defence Missile Squadron made up of three missile divisions: in Zeltiņi, Strautiņi and Tirza. Each division had control of four medium-range ballistic P-12 and Р-12У missiles.

At the Zeltiņi military base you can also see a statue of Lenin's head, which was displayed in the central square of Alūksne in Soviet times. Nowadays, Lenin Square is in the middle of the forest, and Vladimir's 3.5 metre tall head has been placed on a former missile platform in the centre of the clearing.

If you want to find everything located there and find out some interesting tales, it is best to book a guide before arriving. More information and contact details here: www.bazezeltinos.lv

An undeniable part of Soviet history is the history of cars and motors. Both the vivid films made in Riga and the memories of those alive during those times are full of wonderful scenes full of Ladas, Volgas and other cars.

Those who are interested in cars should visit the Bauska area, where you will find not only ancient castles, but also several interesting car exhibitions. For example, the hangars of the Miķelis leisure complex display more than 100 cars from different eras, and the guide will tell you all sorts of stories about these automobiles. Meanwhile, Soviet-era heavy goods and four-wheel drive vehicles can be found at the Bauska branch of the Riga Motor Museum. Mūsa Raceland is also interesting, as you can try your hand at driving a rally car, while the Sendienas Museum located at the Mačēni farm displays various historical cars and machinery, and there are two bobsleighs which you can sit in. The Bauska Tourism Centre has created a special route for enthusiasts of car history. Read more here.

Meanwhile, the Riga Motor Museum has a whole floor dedicated to the Soviet era. Many will remember the times when people with empty baskets would fill a rattling public bus to the forest on a Saturday morning, returning with full baskets for a friendly journey back. You can also view ambulances and military cars, plus many other interesting objects, including the limousines used by elite Soviet officials. Despite promoting moderation, the Soviet state and Communist Party leaders didn't lead by example—their cars were always expensive and special. These are also on display at the museum. Read more here.

The former leader of the Soviet Union's summer house, Baltijas Brīze, in the territory of the Dzintarkrasts sanatorium. The once hidden and fiercely guarded part of the sanatorium has been open to visitors since 2009. To view it, visit the Jūrmala Tourist Information Centre, where they will explain the history of this place and how to get there. More information here.

Vasarnīca nr. 2 (Summer House No. 2) is in a pine forest near the sea, in quite a remote location. And, of course, this was done on purpose—to avoid onlookers and allow important men to relax.

Nowadays, visitors are offered a show and an unusual way to spend your free time. Plus, the environment has truly been authentically preserved, which will remind you of the reality of the Soviet Union.

Nine metres underground is a well-equipped bunker more than 2000 m2 in area which was only declassified in 2003. It was one of the most strategically important locations in Soviet Latvia in the event of a nuclear war. The powerful autonomous structure was equipped with all necessities and the most modern equipment of its time.

All the authentic underground equipment has been preserved.

Themed tours, a meal in the canteen, uniforms and other special touches give this attraction an authentic and eerie feeling.

A walk around this bunker will seem exotic for international visitors and those who weren't alive during the Soviet Union. Meanwhile, for older and middle aged visitors, this will be like stepping into a time machine, with each object triggering memories of politics classes at school, military colleges and army commands.

On an Island, In a Bus or Up a Tree: Interesting Tourist Accommodations in Latvia

Get to Know Riga: How to Get to the City Centre and What to See There

Visit Latgale: The 12 Most Beautiful Nature Trails for Unusual and Unhurried Walks

Weekend Walk: What to See and Enjoy in Sigulda

Weekend Destination—Cēsis: What to See and Enjoy

Wine Tour of Latvia: Places to Visit, Discover and Taste

Ladas, Oilcloths and Even Lenin’s Head: Places for Tourists to See Soviet Objects

Taste Latgale: 10 Places to Discover and Taste the Culinary Gems of Latgale

10 Interesting and Legendary Places to See in Latvia

10 Manor Houses Recommended By the Author of Manors in Latvia

5 Places to Enjoy a Healthy Outdoor Break Near Riga

Latvia is the Most Beautiful: Seven Ideas for a Classic Autumn Day Out

Eight Beautiful Manor and Castle Parks To Visit This Year 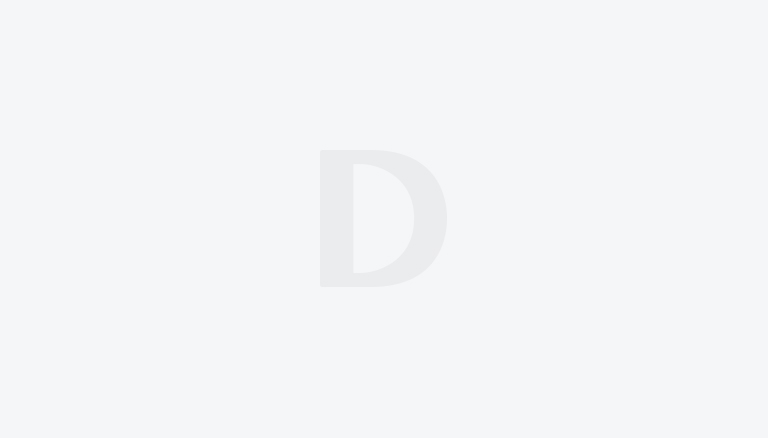 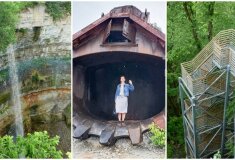 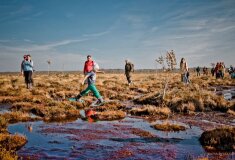 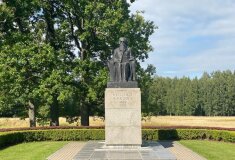 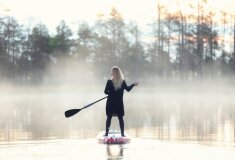 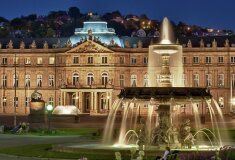 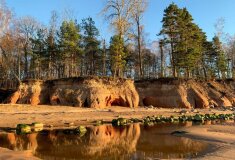 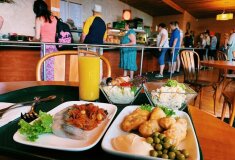 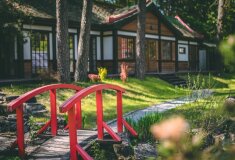 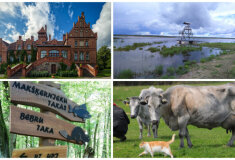 No mapping found for #12 element.

No mapping found for #13 element.

No mapping found for #14 element.

No mapping found for #16 element.

No mapping found for #18 element.